The Difference Between Sun Rocks And Moon Rocks 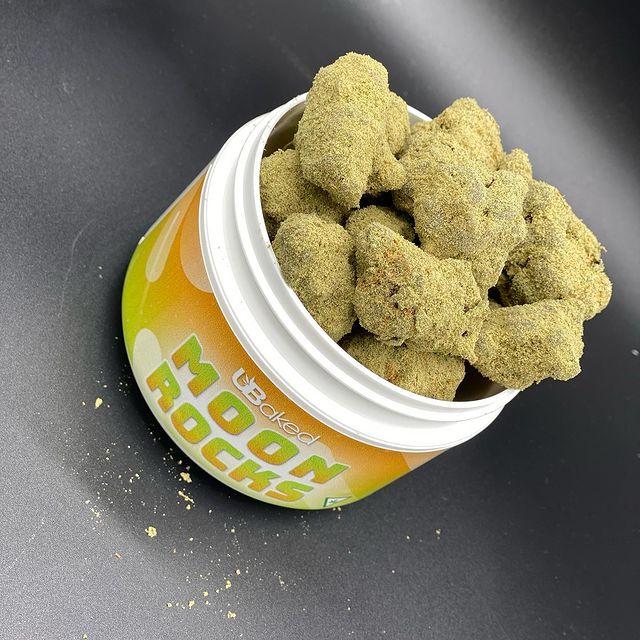 If you fancy yourself a cannabis aficionado, you’ve probably heard of moon rocks. Maybe you’ve even tried them and had a pretty unforgettable experience.

It’s not difficult to find moon rocks on many a provisioning center’s menus these days. They’ve experienced a meteoric rise in popularity on the legal market. And for good reason.

But now there’s a new distillate-heavy nug in town – the sun rock. And it’s leaving many to question the difference between sun rocks and moon rocks.

What Is a Moon Rock?

Moon rocks are buds that have been dipped in, sprayed with, or soaked in hash oil, then rolled in kief. Rumor has it that West Coast rapper Kurupt popularized these potent nugs with his own version that he called Kurupt Moonrock.

Whatever the case, these aptly named “rocks” can send you into the stratosphere. Though the potency of each batch varies, most typically clock in at around 50% THC. Folks who enjoy moon rocks wax poetic about its delicious terpene-rich flavor and its slow burn that starts in the head and spreads to the entire body.

The moon rock experience is not one to be taken lightly though. The effects can easily be felt the next day, so plan ahead.

The Difference Between Sun Rocks and Moon Rocks

Look at sun rocks and moon rocks sitting side by side and you won’t see much of a difference. Furthermore, each of them offers potent effects, high THC content, and a combination of cannabis extracts.

But where moon rocks can be made from bud, hash oil, and kief from any strain and of any quality, sun rocks are created from more pedigreed product. In other words, moon rocks are mutts while sun rocks are purebreds. In order to call itself a sun rock, it must be crafted from top-shelf buds, clean and pure extracts, and strong kief. And they must all come from the same strain.

As such, it’s much more difficult to get a sense of what the terpene flavors and effects will be in a moon rock than in a sun rock. Especially if the moon rock was made with low quality buds and bottom-shelf hash oil from different strains.

On the other hand, the exacting standards required for making a sun rock result in a trichome-rich resin and better flavor. In addition, the THC content in sun rocks tends to run higher (no pun intended) than in moon rocks. While moon rocks generally max out at 60%, sun rocks can go as high as 80% THC.

How Does One Consume Sun Rocks?

As we mentioned above, it’s important to set aside some serious time to experiment with sun rocks. Especially if you come across one of the more potent strains.

Also, sun rocks can be a bit messy. They’re not really an on-the-go type affair. Most sun rock consumers take pleasure in the ritualistic aspect of it all – setting up a table with glass paraphernalia and tweezers to better handle the buds.

A rock can be cut up and smoked either on its own, or by mixing it with cannabis flower (ideally of the same strain) to keep it alight. It’s best to keep it away from heat.

Here are the three most popular ways:

Glass is recommended for consuming both sun rocks and moon rocks. A pipe or a bong are the preferred methods. Attempting to add rocks to a blunt or joint can be messy. And you’ll need to avoid using a grinder, as the distillates could jam it up.

2. Layered In A Bowl

The tricky part with a bowl is getting everything to burn evenly. So when adding rock pieces to the regular flower in the blow, don’t just sprinkle them on top. Rather mix or layer them in with the other flower.

In the case of smoking a bowl without any additional flower, break up the rocks as small as possible. Otherwise, you run the risk of wasting plant matter by trying to light larger pieces. In addition, ditch the butane lighter and use a hemp wick instead. That way you’ll avoid scorching and allow for the full flavor of the rock to emerge.

Regardless of whether you’re going with rocks or prefer the more familiar high that comes from flower, vaping, oils, or edibles, be sure you’re sourcing from only a reputable and top-of-the-line producer. You can start by clicking here to find out where you can buy the best of the best.