The Story Behind Hash Bash 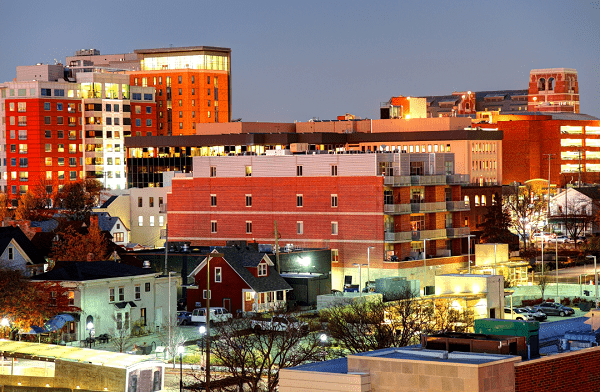 If you’re planning on zipping into Ann Arbor to enjoy Hash Bash this year, you may be interested in how this enduring protest of marijuana laws began.

Or maybe you’re not, and that’s okay too. Whatever the case, we’re going to fill you in on the story behind Hash Bash. Then you can do what you want with the info.

We’ll begin by saying it actually stemmed from a benefit concert being held for John Sinclair at the Crisler Arena in 1971.

Who Is John Sinclair?

If you’ve spent any time in cannabis circles, you’ve probably heard of John Sinclair. He’s a poet, writer, and political activist who lives in Amsterdam, but is originally from Flint. He was also arrested for possession of two marijuana cigarettes in 1969 and given ten years in prison.

The sentence was criticized by the 1960s counterculture as unduly harsh and a protest movement was immediately set into action. Even Abbie Hoffman interrupted the Who’s set at Woodstock to speak out against the injustice.

Finally, two and half years into Sinclair’s sentence, musicians and other figures including John Lennon, Yoko Ono, Stevie Wonder, Bob Seger, Allen Ginsberg, Phil Ochs, Archie Shepp, and Bobby Seale came together with Sinclair’s wife Leni to advocate for his release. The event was called the “John Sinclair Freedom Rally” and Lennon even wrote a song for the occasion.

Just three days later, the Michigan Supreme Court ordered Sinclair released on an appeal bond while it considered the constitutionality of the law. Upon completing its review, Sinclair’s conviction was overturned on March 9, 1972. They declared that the statute violated the state Constitution’s equal protection clause for falsely classifying marijuana as a narcotic.

The state legislature then reclassified pot possession as a misdemeanor. The new law wouldn’t take effect until April 3rd of 1972 though. Thus, for a very short time in 1972, there was no state marijuana law on the books.

And that window just so happened to include April Fool’s Day.

The Story Behind Hash Bash

To celebrate this lack of marijuana law, a group of jokesters suggested Ann Arbor have a “Hash Festival” on April 1, 1972. They posted flyers all over the campus that claimed they would host Van Morrison, Pharaoh Sanders, and their own band. As it turns out, neither Morrison nor Sanders had any plan to be there. And the other band was fictitious.

Still, the story found its way to the Michigan Daily – the campus newspaper – and they later reported that 500 people showed up for the event. The police put the figure at closer to 150. Regardless, there were no arrests and the festival was peaceful and orderly.

When the city council passed an ordinance just a few months later that made marijuana possession a scant $5 civil fine, Ann Arbor found its place on the map as a hot bed for cannabis reform.

Hash Bash Over the Years

With word traveling fast (even in those pre-internet days) the 1973 Hash Bash drew more than 5,000 folks – one of whom as State Representative Perry Bullard who took a photo op to openly toke a joint.

The new $5 fine law was temporarily repealed after that, but a year later, the highly affordable marijuana fine returned when a citywide referendum called to entrench it and a city charter passed it. The law could no longer be overturned by City Council vote.

Hash Bash continued to grow and evolve. The peaceful protest energy at the genesis of the festival began to fade though as belligerent high school students started taking over. By 1977, interest was waning. Then, of course, the Reagan-era war on drugs set out to demonize marijuana once again throughout the 1980s.

But when a group of “Freedom Fighters” from High Times emerged on the Diag in 1988, dressed as colonial Minutemen and carrying a banner proclaiming “Pot Is Legal”, Hash Bash experienced a serious rebirth. 2,000 people showed up that year, with 5,000 making the rounds a year later in 1989.

Unfortunately, a celebration of U of M’s men’s basketball team winning that same night and earning a trip to the national championships turned into a riot on South University. U of M President James Duderstadt took it as an opportunity to blame Hash Bash and pronounce that the festival would not be held the following year.

Hash Bash Would Not Go Away

Lawsuits ensued between the campus NORML chapter and U of M throughout the late 1980s and early 1990s, with NORML always coming out on top. The 1990 Hash Bash was a more serious affair, with the newly formed campus police vowing to enforce the state marijuana law and its criminal penalties.

But the Hash Bash couldn’t be taken down. In 1991,10,000 people were there to celebrate. Attendance continued to soar throughout the 1990s with John Sinclair attending in 1996.

By the 2000s, attendance had dropped. But the 2009 Hash Bash on April 4th was a red letter day – celebrating medical marijuana’s victory in Michigan. There were 1600 participants. Ten years later, in 2019, Governor Gretchen Whitmer recorded a video for Hash Bash attendees celebrating the legalization of recreational cannabis.

The story of Hash Bash illustrates the strides taken in celebrating and legalizing marijuana. We’ve still got a ways to go though.

If you’re attending Hash Bash this year, remember everyone who fought to make legalization a reality. From the John Sinclairs and Michael Thompsons who were unfairly arrested, to the big names in the counter culture willing to put their jobs and reputations on the line.

Furthermore, it you’re planning to celebrate this year, be sure to get only the best cannabis from a top cultivation facility such as UBaked. You can find dispensaries carrying our product in Ann Arbor and beyond by clicking here.