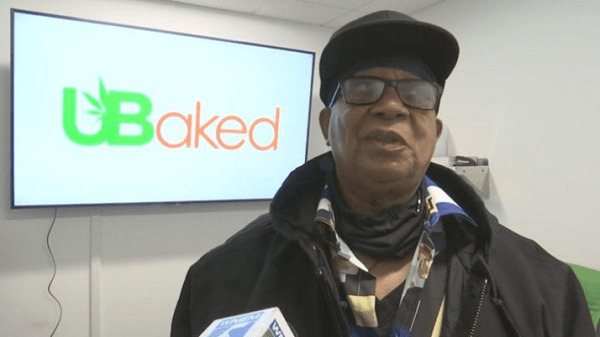 After spending more than two decades behind bars, the very drug that put him there is providing Michael Thompson with a new, life-changing opportunity.

Thompson launched a new career on Tuesday, March 2 in the cannabis industry.

Words are hard for Thompson to find when it comes to describing his freedom. TV5 was there as Thompson was released from prison after 25 years in January because Gov. Gretchen Whitmer commuted his sentence.

March 2 was Thompson’s first day on the job for Ubaked Cannabis, a cultivation and processing facility in Burton. The company is offering Thompson a platform to talk about justice system reform.

“The owner here understands my cry to help them,” Thompson said. “So that’s what I’m here for.”

Thompson had been serving 25 years of a 40 to 60-year sentence for selling three pounds of marijuana and owning guns. His grandson, Michael, who also works for Ubaked, says that’s an injustice that plays out far too often.

“Nobody should’ve did that much time for no marijuana, nobody,” Thompson said.

Bob Dodge is the CEO for Ubaked Cannabis.

“Personally, I felt indebted that we are profiting from this industry after he spent 25 years in prison,” Dodge said.

“We go to dispensaries and we do vendor days and that may be an opportunity for us to incorporate you and you know hire you as a brand ambassador and get your message out there,” Dodge said.

Thompson was quick to point out there are a lot of people in prison right now who are just like him. He says he’ll do everything he can to raise awareness that in many cases the punishment doesn’t fit the crime.

“The criminal justice system is broken and it needs to be fixed,” Thompson said.

Content and image courtesy of reporter James Felton and WNEM.